Beckett's most famed work is the play “Waiting for Godot” {pronounced GOD-oh} - Beckett's own translation of his original French-language play “En attendant Godot” and is subtitled (in English only) “A tragicomedy in two acts.”

In case you don’t know I have a B.A in Theatre from Tel-Aviv University, so I studied Beckett's works in depth and can talk and discuss “Waiting for Godot” for a long time... It was a true innovation in drama and the Theatre of the Absurd first theatrical success and for me, sits up there with "The Chairs" by Eugène Ionesco form the same period of time (1950s).
But I'm not really here to talk about theatre - So I'll make it short: 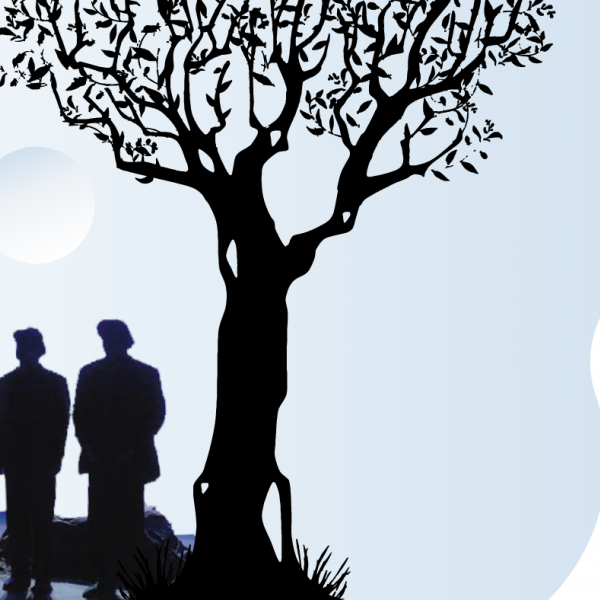 In the play, Vladimir ('Didi') and Estragon ('Gogo' or 'Pozzo') are two humans who do not know why they were put on earth. They make the tenuous assumption that there must be some point to their existence, and they look to Godot for enlightenment.

I think we’re all sort of waiting for that mysterious someone or something that would appear and give us all the answers, or tell us “it’s all over!”.
Humans have always been searching for the meaning of life as evident in our literature, art, culture and of course religion... I suppose these strange times we live in brought this up to the surface more than usual, but it's not really new to our human existence ... It just feels more 'present' nowadays.
{like Godot who continually sends word that he will appear I'm now waiting for the Gov announcement Monday about schools reopening - but I cannot help thinking about Godot that - in case you missed it - never arrives...}

There's nothing wrong with 'waiting' per se.
But, if "waiting" gives way to PARALYSIS OF ACTION, if it brings us to put our LIFE ON-HOLD, we just might end up like Didi and Pozzo as life passes us by...

VLADIMIR: Well? Shall we go?
ESTRAGON: Yes, lets go.
[They do not move.]

One of my favorite quotes from the play is actually this one:

I was a dancer. Dance and movement was, and is, my way of being.
I’m a Pilates teacher.
I improve people’s ability to move and take physical action – bend down, reach up, turn around, walk, run, play, ski, bike, ride, pick up children, carry shopping, wash hair...
Without any doubt I know that improving a person’s physical ability to move improves that person's mental, emotional, physiological and cognitive ability.
We move through life and that ability enhances our ability to live a fuller life.

Doing Pilates on the Reformer - for example - starts like this:

YOU DO. All your neural channels are occupied simply following directions: "Do this" or "Do that". You keep your mind focused on the movement of the moment. All unrelated thoughts are suppressed. YOU DO.

"This was far different from the rest of my day, where my brain seemed crammed with stuff demanding my attention. [...]
I was in a state of suspended consciousness."
'CAGED LION: JOSEPH PILATES AND HIS LEGACY' - John Howard Steel, Page 7.

Things might change. Our timetable might change as we get more information from the powers that be - but we'll be adjusting and continuing with DOING PILATES 💙 - Aoife